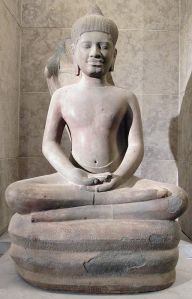 Around the period of the 5th century BCE the archetype of the enlightened one crystallised in a number of regions and faiths. In China the teachings of Confucius became the basis for a way of life in which wisdom was central. Teaching altruism, loyalty, etiquette and filial piety Confucianism is an a philosophy and ethical system based on the idea of thoughtful and wise living.

By three methods we may learn wisdom: First, by reflection, which is noblest; second, by imitation, which is easiest; and third by experience, which is the bitterest. – Confucius

At the same time the wisdom tradition in the Middle East was also flourishing and gave birth to the wisdom literature in the Israelite scriptures, such as Ecclesiastes and proverbs. Interestingly there is only a minor mention of the divine in the wisdom tradition, when you read through Confcian literature or the wisdom writings of the Jewish scriptures the main emphasis is on right living in the here and now although Confucianism allows a place for traditional Chinese religion and the author of proverbs owns that the fear of the Lord is the beginning of wisdom. That does not mean that wisdom itself does not take on a semi divine form as she does in the figure of Sophia who we are told by the author of Proverbs was there at the beginning of creation, one of God’s most beloved companions.

In Greece the wisdom archetype was taken up by the philosophers. Plato, typical of those taken over by wisdom, has a minor role for the Gods and yet also typically Socrates is killed, accused of teaching the young to ignore the Gods. Socrates through his death becomes the martyr par excellence to Wisdom.

There is a definite tension between the cooler reflection of the followers of wisdom and the hotter, passionate devotion of the more purely religious. This can be seen now days in the tendency of faith to cool when the study of theology is undertaken. The division of science and religion particularly in the west is perhaps a more virulent form of this division.

It was as a practitioner of asceticism that Buddha began his religious career and it is this context of Hindu renunciation that shaped  Siddhartha Gautama, the founder of Buddhism. The word “Buddha” which was given to Siddhartha and by which the faith that developed from him is known, means “awakened one” or “the enlightened one” It is an example of a complex archetype that combines the archetype of enlightenment with that of detachment. Buddha’s enlightenment was an enlightenment around the impermanent nature of things and of the necessity of detachment. This ascribed enlightenment refers to coming to a full realisation about the nature of all things (Bodhi) or the self and the path of salvation (prajna). So identified with the archetype that it becomes an archetype within this part of the world and others strive to embody it and become ‘Buddhas”. There are differing levels to which Buddha is regarded from God like to human and it is interesting that all these can still contain the archetype.