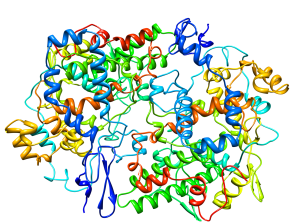 The complex structure of a molecule. By Cytochrome c at English Wikipedia

A complex is an intricate assemblage of related things or parts. We are used to talking about our education system as a complex: there are physical classrooms, teachers, students and curriculum and technologies to deliver the content, all these different parts interact with one another to give the experience called education. Spirituality is also a complex with inter-related parts such as rituals, beliefs, gods, experiences authorities, holy books and myths – all interacting and affecting one another. We could look at spirituality through the lens of each of these dimensions and many have, Joseph Campbell wrote about spirituality through the lens of mythology, others have looked at it through the lenses of beliefs or through the prism of evolution. Each of these approaches will throw up their own insights and highlight differences in approaches and similarities in people’s spiritual practices. The purpose of this web site is to look at spirituality from the archetypal perspective. That is not to say that it is the only perspective, but for some of the reasons outlined below it is a very significant one and one I have found enormously fruitful in understanding how spirituality works and why the commonalities and differences exist as they do. Furthermore as Western society continues to move away from its traditional religious expressions the archetypal approach will be helpful in finding new paradigms.

There is another more specialised way in which the word “complex” is used in psychology. We have all heard the expression “mother complex” to describe a man whose relationship with women is determined by his relationship with his mother. Of course this is true to some extent of all men but especially when a man continually responds to his partner as he did his mother. The idea of a complex in psychology goes back to Eugen Bleuler but was later developed by Jung. In Jung’s writing a complex was the name he gave to a group of feeling, associations and behaviours which had a sort of semi-autonomous status in the human mind.  A typical example might be a “saviour complex” where an individual is continually drawn to saving people. This is a complex which might shape a person’s career, for instance becoming a social worker, and even their personal relationships – they may be constantly draw into romantic trysts with people whose lives are out of control and need saving. It is autonomous in the sense that when a person meets someone in need they cannot help but to try to “rescue” them. The complex as it is made up of a variety of behaviours (offering assistance), feelings (elation when someone’ life is improved by my intervention) and beliefs (“My role is to help others”).

It can be helpful to look at spirituality as a complex (even though this is a slightly broader usage of the term than Jung intended). We can see that spirituality is made up of interacting elements such as beliefs, behaviours and feelings and narratives. Each one of these components affects the other, religious behaviours such as prayer affect feelings which in turn may re-inforce beliefs. When people question their faith in the narratives or myths of their religion it changes their feelings and behaviours. This is what has been happening with secularisation in Western culture. On the other hand, religious conversion comes about when a person adopts a faith and a complex is constellated for them. It is this complex nature of spirituality which makes it self-reinforcing for people – doing meditation may produce a sense of calm for a Buddhist which re-enforces the teaching of their faith – and gives it a personal and social stability.

Jung pointed out that complexes have a certain autonomy in the human psyche. They can act like sub-routines in the programming of the brain, once they are triggered they run through their own routine. This can be true in spirituality too. A person’s religious life can be surprisingly separate from the rest of their existence, so much so that one can be quite religious and yet intolerant or violent in ways which seem to run counter to the teachings of that faith. Religious leaders expend much effort, often in vain, to try to get their adherents to live their lives in a manner consistent with their spirituality.

We are, of course, interested in how archetypes fit into these spiritual complexes and it is not surprising to observe that they are usually central. By definition, Archetypes are organising principles of the psyche. Let’s take the case of Christianity. The archetype of the sacrificial lamb is the organising principle around which the theology of salvation is organised, the ritual of the mass is enacted and the festival of Easter is celebrated – the myth of the passion and sacrifice of Christ takes up a third of the gospel story. Take away that archetype and the rest will fold. Furthermore the archetype, being numinous, provides much of the energy of a spiritual system. Moksha in Hinduism (liberation and self- knowledge) may be a goal in Hinduism but historically it has coalesced around the god Shiva who inspires devotion and inspiration. As important as archetypes are in explaining spirituality they are even more important in the evolution of spirituality as they provide the energy around which new movements coalesce. These changes happen within spiritual traditions as well as across them. In the West in 20th century was marked by a huge revival in the archetype of the spirit in Christianity which gave rise to Pentecostalism and  alongside that movement was also a rise in the archetype of mother earth, Gaia, through the environmental movement and the influx of eastern spiritualties in the new age movement.